Incredibly smart, well-spoken, opinionated and witty, Cpl. Jordan J. Anderson had a thirst for knowledge that knew no bounds. Cpl. Anderson grew up in Canada’s far north. Born in Frobisher Bay, Northwest Territories (now Iqaluit, Nunavut) with stops in Pelly Bay, Tuktoyaktuk and finally Inuvik where he went to Sir Alexander Mackenzie School, before heading off to high school at Athol Murray College of Notre Dame in Wilcox, SK. It was there as a football and rugby player he showed he was a true team player, a trait that would serve him well during his military career.

That career began on July 20, 2000, when he enlisted and was posted to the 3rd Battalion Princess Patricia’s Canadian Light Infantry. It was a busy and exciting time for Cpl. Anderson. In the summer of 2001, while at a CFSAC (a military shooting competition) in Ottawa, he met his future wife Amanda. In February 2002 he deployed on “Op Apollo,” Canada’s first mission in Afghanistan. He returned safely later that year.

Cpl. Anderson loved being a soldier, especially a paratrooper, but in 2005 a bad jump almost put an end to that. In fact, doctors told him there was only a 10 per cent chance he would return to the infantry and a two per cent chance he would ever jump again. For four months he wore a spray painted, camouflage green cast from his armpits to his hip! Determined to jump again, he pushed the doctors and himself to heal and that perseverance paid off. Cpl. Anderson jumped again and his doctor met him in the drop zone to shake his hand. As for the cast… he took it to CFB Wainwright and blew it up! Cpl. Anderson married Amanda in 2005 and was deployed again in 2007.

On March 20, 2007, while on duty in Afghanistan, Cpl. Anderson used his tactical combat casualty skills to save the life of a U.S. contractor when his bomb-sniffing dog accidentally set off the improvised explosive device they were trying to locate. The contractor later called to thank Cpl. Anderson, only to find out he had been killed two weeks earlier.

Cpl. Anderson was quietly proud of the work he and his fellow soldiers were doing. He genuinely felt he was making life safer and better for the Afghan people and helping rid the country of international terrorism. Someday he hoped to return as a tourist.

Cpl. Anderson, along with five other soldiers and an Afghan interpreter ,were killed then their RG-31 Nyala hit a massive roadside bomb on 04 July 2007. At the time it was the largest improvised explosive device NATO had ever experienced.

Cpl. Anderson was one course short of finishing his Bachelor of Arts degree, specializing in political science and history at the University of Manitoba, when he died. He planned on earning his master degree in strategic studies and becoming an intelligence officer. As a result of requests by his friends and army.ca, the university awarded his degree posthumously. It was the first time since the Korean War a Canadian university had given a posthumous degree to a member of the forces killed in action. Today there is the “On The Ramp” at the University of Manitoba in Jordan’s name available to a serving, or retired member of the forces or a cadet. Donations can be made online via the University of Manitoba website (donations raise the annual bursary disbursement amount).

In the days following his death, Cpl. Anderson’s candor and intelligence were remembered in a letter from his commanding officer, which said how much, he “going to miss Jordan telling me how to run the battalion.”

Cpl. Anderson prepared his wife, Amanda, if the worst were to happen, telling her “you will meet lots of important people. Tell them to focus on the mission. Not the casualties.”

In the days that followed his death, Amanda, found these words her husband had written: “I’m not afraid to die. I know what I’m doing is right… and I’ve made arrangements for those I love. I know it won’t be for nothing.” 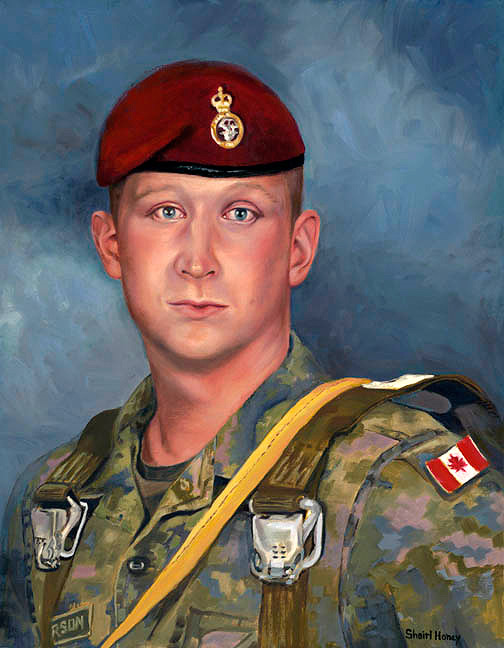