Husband, brother, son and soldier. Master Cpl. Raymond Arndt was known in many different ways and to so many people. He was an incredible friend. Generous and fun, outgoing and charismatic, logical and loud, he had a wonderful way of making a person feel like the most important person in the world.

Master Cpl. Arndt was born in Edson, and grew up in Peers, Alberta, the brother to three sisters. As much as he loved them, he had always wanted a brother and it was the military where he found all the brothers and camaraderie he needed.

He enlisted as a reservist with the Loyal Edmonton Regiment in May of 2000. As an Eddie, he was proud to be part of the Alberta’s oldest infantry reserve. Master Cpl. Arndt immersed himself in the regiment, even becoming a drummer in the LER Pipes and Drums band. He loved the military and his dream was to serve an overseas mission. He had come close to serving in Bosnia in 2002, but there was a challenge, one he was determined wouldn’t hold him back!

Master Cpl. Arndt was born with a club foot. He underwent numerous surgeries as a child and every time he had to learn how to walk again. That perseverance served him well as a soldier. Those surgeries resulted in two different sized feet. His left foot was a 5.5, his right was a 7.5 and he had difficulty wearing normal shoes, let alone combat boots. For years he wore a boot that was two sizes too big for his left foot and during training for Bosnia it caused painful blistering and resulted in an injured knee. But he didn’t give up! His dream to serve overseas came true in February 2006, when with the right sized boots he completed training in Wainwright and was deployed to Afghanistan.

Saying goodbye to him at the Edmonton Garrison was his father, his sisters and his wife Darcia. He had met Darcia three years earlier at a Loyal Edmonton Regiment mess dinner. Their first “real” date was Nov. 11, 2003, when she went to see him on parade. They were married two years later on Nov. 19, 2005, and within months he was on tour.

As a part of the force protection platoon, Master Cpl. Arndt’s job in Afghanistan was a dangerous one, which saw him and his fellow soldiers escorting resupply convoys throughout the volatile Kandahar province. He loved every minute of it, believing he was doing something worthwhile and helping a country in need.

On Aug. 5, 2006, Master Cpl. Arndt was on his 85th convoy mission when the armoured vehicle he was in collided head on with a truck 35-km southeast of Kandahar. They were delivering medical supplies to an outpost near the Afghani-Pakistani border. His death marked the first time since the Second World War that a member of the Loyal Edmonton Regiment has died during operations.

The man, the soldier, who had been nicknamed “Pickle Man” and “Old Man Rage” by friends, was less than four days from finishing his six-month mission in Kandahar, 11 days from returning to Edmonton. 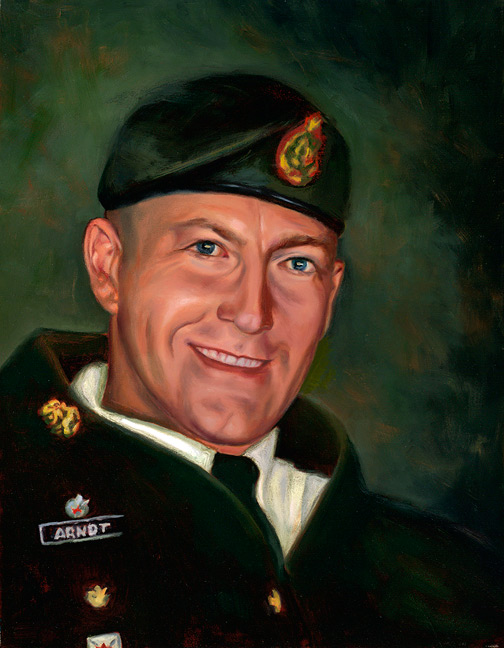