Two things stand out about the kind of man Aaron Williams was over the course of his all too short life… his tremendous sense of fun and his love of outdoor activities. Underpinning these essential aspects of his character more recently was his devotion and adoration of his young daughter, now 10. And, he loved the army. It was a career he had thought about since he was a young boy.

Growing up in the small community of Perth-Andover, Aaron had easy access to the woods nearby, often taking little excursions to explore, to hunt, go mudding, have cook-outs, and camp. He was often accompanied by his best friend, his sister Kim, even in winter. One time they built a winter lean-to and fire pit, and camped overnight. This spot is still used by the family for cookouts. While Aaron was keen on these activities, he was less keen on schoolwork, although this didn’t stop him from serving as vice president on Student Council. Nor did it stop him from having fun at school, where he got lots of attention from the girls, who found him handsome and athletic – he had played hockey since age six. On one occasion, some high school girls “bought” Aaron at auction, and the deal was that he had to dress up as a girl and parade down the street for all to see: no problem, he loved it, and it was just another way for him to make those around him happy! Aaron must have had this notion of making others happy from an early age, since his mother fondly remembers him explaining at age four that it was terribly important for him to get a haircut since, when he did, people would smile at him. Other childhood adventures including hunting and driving his father’s old truck – including slamming it into a tree. Despite having a broken nose, this was all just too much fun for Aaron to be bothered going to hospital so he just pushed his nose back into place (sort of).

Aaron always knew he wanted his career to be in an organization with a clear purpose of helping people. Upon high school graduation, he considered the RCMP, but enlisted instead in The Royal Canadian Regiment in 2003. He was posted to CFB Gagetown, making his first tour to Afghanistan in 2005, shortly after the birth of his daughter Kayla. He was a hands-on, loving, charming and funny dad. This was a side of him that few had yet seen, but just as he fit naturally into army life, he fit naturally into fatherhood. Perhaps being the baby in the family of three older sisters prepared him well for being a great dad. Aaron and his fiancée Jenn were planning the next important steps in their lives as a family, having bought a home in 2006 and set a wedding date for October 2007.

In Afghanistan, Aaron was a sniper. His fellow soldiers found him to be quiet, competent, mature, and confident in the directions his career and life were taking. He wrote home that the conditions in which the Afghan people lived were disturbing when seen for the first time through the eyes of someone who had grown up a world away. In particular, the smells and dirt were unsettling. The pervasive unease when dealing with Afghans in the streets, even children who could pose hidden dangers to soldiers, was particularly difficult compared to his own childhood and the life of his own child (who has recently followed in her father’s footsteps and taken up hockey herself).

Nonetheless, Aaron’s family and comrades felt that he was where he wanted to be, truly trying to help others, which, as a grounded and happy person, is what he wanted. Just as he used to say when someone phoned him and asked him what he was doing, he would reply, “Whatever I want.” 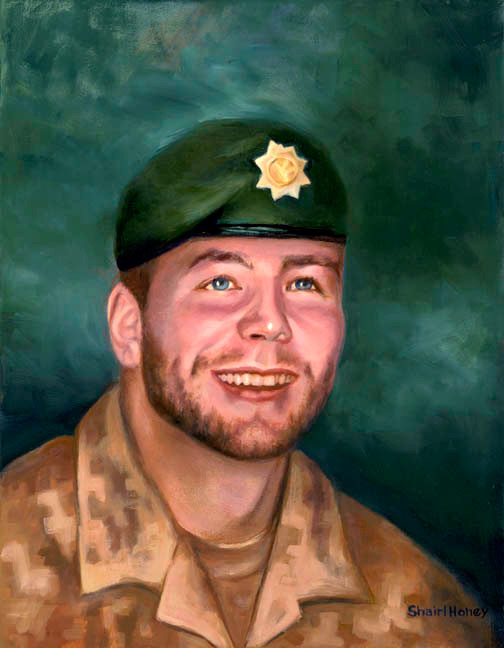